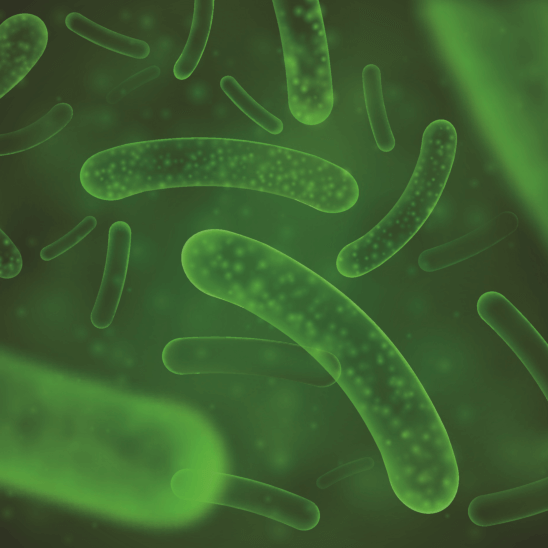 Probiotics are live micro-organisms (often bacteria) that are thought to have a positive effect on the health of the host organism (i.e. our bodies) and, in particular, digestive tract health. They are more commonly referred to as “friendly bacteria” or “good bacteria.”

Most probiotics are bacteria similar to those naturally found in the gut, especially in those of breastfed infants (who have natural protection against many diseases). Lactic acid bacteria (LAB) and bifidobacteria are the most common types of microbes used in probiotic supplements, but certain yeasts and bacilli are also used.

Probiotics are commonly consumed as part of fermented foods with specially added active live cultures, such as in yoghurt, soy yoghurt fermented, unfermented milk, miso, tempeh and some juices and soy beverages or as dietary supplements. In probiotic foods and supplements, the bacteria may have been present originally or added during preparation.

Probiotics are not the same thing as prebiotics, which are non-digestible food ingredients that selectively stimulate the growth and/or activity of beneficial microorganisms already in people’s colons – in other words, provide food for the good bacteria. When probiotics and prebiotics are mixed together, they form a synbiotic.

Investigations into the benefits of probiotic therapies suggest a range of potentially beneficial uses.

Managing lactose intolerance
Some people use probiotics to ease symptoms of lactose intolerance, a condition in which the gut lacks the enzyme needed to digest large amounts of the major sugar in milk and which also causes gastrointestinal symptoms. As lactic acid bacteria actively convert lactose into lactic acid, ingestion of certain active strains may help lactose intolerant individuals tolerate more lactose than they would have otherwise.

Lowering cholesterol
Studies have demonstrated the effectiveness of a range of lactic acid bacteria (LAB) in lowering serum cholesterol levels, presumably by breaking down bile in the gut, thus inhibiting its re-absorption (which enters the blood as cholesterol).

Lowering blood pressure
Clinical trials have indicated that consumption of milk fermented with various strains of LAB may result in reductions in blood pressure. It is thought that this is due to the ACE inhibitor-like peptides produced during fermentation.

Improving immune function and preventing infections
There are cells in the digestive tract connected with the immune system. One theory is that if you alter the microorganisms in a person’s intestinal tract (e.g. by introducing probiotic bacteria), you can affect the immune system’s defences.

A 2010 study suggested that the anecdotal benefits of probiotic therapies as beneficial for preventing secondary infections, a common complication of antibiotic therapy, may be because keeping the immune system primed by eating foods enhanced with “good” bacteria may help counteract the negative effects of sickness and antibiotics. It was thought that antibiotics may turn the immune system “off” while probiotics turns it back on “idle”, and more able to quickly react to new infections.

LAB foods and supplements have been shown to aid in the treatment and prevention of acute diarrhoea and in decreasing the severity and duration of rotavirus infections in children and travellers’ diarrhoea in adults.

Antibiotic-associated diarrhoea
Antibiotics kill friendly bacteria in the gut along with unfriendly bacteria. Probiotics are sometimes used to try to offset side effects from antibiotics like gas, cramping, or diarrhoea. Antibiotic-associated diarrhoea (AAD) results from an imbalance in the colonic microbiota caused by antibiotic therapy. Probiotic treatment can reduce the incidence and severity of AAD as indicated in several meta-analyses.

Reducing inflammation
LAB and supplements have been found to modulate inflammatory and hypersensitivity responses. Clinical studies suggest that they can prevent reoccurrences of inflammatory bowel disease in adults, as well as improve milk allergies.

Improving mineral absorption
It is thought that probiotic lactobacilli may help correct malabsorption of trace minerals, found particularly in those with diets high in phytate content from whole grains, nuts, and legumes.

Irritable bowel syndrome and colitis
Certain probiotics have been found to improve symptoms of IBS and to be safe in treating ulcerative colitis.

Other facts about probiotics

How do probiotics work?

When we consume probiotics they start to compete with bad bacteria and pathogens for space and for food – therefore evicting them from our gut. Probiotics also stimulate our own immune system to enable it to fight infections better, as well as help us to digest fibre from our diet and in doing so they produce acid compounds that keep the lining of our gut healthy.

“Unfriendly” microorganisms (such as disease-causing bacteria, yeasts, fungi and parasites) can upset the balance of bacteria in our bodies. At the start of the 20th century, probiotics were thought to be beneficial to the host by improving its intestinal microbial balance, thus inhibiting pathogens and toxin producing bacteria. Today, specific health effects are being investigated and documented including alleviation of chronic intestinal inflammatory diseases, prevention and treatment of pathogen-induced diarrhoea, urogenital infections and atopic diseases.

Researchers are exploring whether probiotics could halt these unfriendly agents in the first place and/or suppress their growth and activity in conditions like: